What to serve with brats? Let’s find out the best side dishes!

Life in the early 17th century was simple yet beautiful. People had limited options to choose from. From food recipes to clothing, things were less complicated. As the world progressed, people’s choices widened, and so did their food choices comprising different cuisines and dishes from around the globe.

This resulted in many food recipes that you see today in the 21st century. When talking about new recipes, one name that hits the brain is brats!

People often get confused about Brats. Bratwurst, commonly known as Brat, is a type of sausage from Germany. It is made from veal (meat of calves), beef, and pork. This unique blend of veal, beef, and pork gives brats its distinct flavor.

They are served with various sauces like mustard sauce, Sriracha sauce, and garlic mayo, to name a few. Brats are heavily spiced, so people with spice intolerance are cautioned. Unlike many European sausages, brats need to be cooked before they are served to the people.

People often inquire about this food’s distinct name. Brat came from the German language, which means ‘finely chopped meat.‘ In contrast, ‘wurst‘ means ‘sausage.’ It is better to know the origin of the name of your favorite dish. Next time somebody asks you about the meaning of bratwurst, you know what to inform them.

What is traditionally served with bratwurst?

Sauerkraut is a sideline prepared by fermented cabbage. This traditional sideline has a zesty flavor that the natives find pretty exciting and enjoyable.

One of the most compelling facts about Sauerkraut is that it is made from only two ingredients: cabbage and salt.

After putting the salt on the cabbage, it is tightly packed in an airtight container. The salty conditions create an environment of beneficial acid-forming bacteria.

This bacteria converts the natural sugars in the cabbage into lactic and acetic acid, which gives the cabbage a tangy flavor. This easy and simple recipe is what the natives like to eat their bratwursts.

What to serve with brats? Delicious side dishes!

As bratwurst’s popularity increased, it quickly spread to other parts of the world. As new areas started consuming them, more and more sidelines came into existence. Now, people have a variety of sidelines to choose from when eating their bratwursts.

Serving brats for dinner or any other time of the day, and you are unsure what to do on the side, then here is a list of sidelines you can prepare. This article talks about some of the best side dishes you would not want to miss.

You don’t have to google what this means. It is just a German name for potato salads. This sideline is prepared with red potatoes dressed in vinegar and bacon grease. This would surely add an extra flavor to your bratwursts. Just make sure you serve them hot.

This salad is made with cabbage, cauliflower, apples, and wall-nuts, to name a few. The mix of fruits and vegetables along with the dressing of cheese makes it the best sideline you can enjoy while eating your bratwursts.

Along with the flavor, they are rich in benefits.

This salad provides the nutrition of vitamin A, vitamin C, and many more other minerals and vitamins to give you a healthy and smart body.

This is the yummiest sideline you would definitely want to have on your plate. Grilled mushrooms along with green and yellow peppers hit the right notes.

The vinegar, garlic, and dried oregano give this sideline a tangy, spicy, and subtle taste that would perfectly balance with your bratwursts. The next time you make some brats, don’t forget your grilled mushrooms sideline. Moreover, this is the best recipe for people who eat greener than red.

If you like your brats extra spicy, then your sides should be cool enough to balance out the palate. Creamy cucumber salad is a traditional German sideline which they often call Gurkensalat.

The freshly cut cucumber dipped in heavy cream is all that you need on your plate while having your next brats. Cucumbers are also rich in water, so this sideline will also provide you with immense nutrients and water supply to keep you going.

6) Grilled Corn on the Cob

This sideline seems easy, but it is not. You might think that grilling corn is the easiest sideline one can prepare, but you’re mistaken because grilling corn on the cob is an art.

Grilling it right keeps its juiciness intact yet gives it a grilled flavor. If you do it wrong, it becomes dried out and tasteless. You don’t want your sidelines to be bland and ruin your brats, so take care when you prepare this side dish.

The savory sides for brats are a must, and having sautéed spinach is just the right sideline that comes to mind. It is an easy sideline that you can throw on the table within minutes.

This sideline has endless benefits too. Spinach helps to lower blood pressure and is an effective diabetic manager. It promotes digestion and makes your skin and hair healthier. With all these benefits, sautéed spinach with garlic becomes an essential part of your plate while you have your brats the next time.

Another side dish for vegetarians is green beans. Just add apple cider vinegar, brown sugar, and whole grain mustard to turn your beans sweet and sour. Adding bacon to your green beans makes this sideline one of the best you can have with your plate of brats.

This marinated-styled salad is a suitable side dish for you. It is a perfect addition to any of your cooked foods, especially bratwursts.

The vegetables include cucumbers, cauliflowers, cabbage, onions, other green vegetables, and sugar, salt, and heavy cream. This creamiest sideline perfectly hits your taste buds. It will never disappoint you when you eat it alongside your plate full of bratwursts.

Confession time: Pierogies are the best! This sideline is the best to eat with your brats and can easily be stored and refrigerated for later use. However, this sideline takes considerable time to prepare as the dough takes the longest to get prepared.

Pierogies can be made with many fillings, making this sideline immensely diverse. The next time you become perplexed about which sides to prepare, your cheddar cheese pierogies should be your first option.

What to serve with bratwurst sausages? 3 Video recipes!

You still don’t know what to serve with brats? Suppose you are serving bratwurst sausages to your guests and want to offer them an exciting sideline that could perfectly go with those brats. In that case, potato pancakes are the best option you have got.

They are also a German-inspired sideline where shredded potatoes are turned into pancakes. This sideline adds a subtle taste to your main course and balances out the spiciness of the bratwursts.

Ever wanted to have something with your main course that’s super light yet tasty? Mashed potatoes are the perfect combination of light and flavorsome. They have a creamy, cheesy, and soft texture, making them super light on the stomach.

However, making mashed potatoes is an art known to few. Just the right amount of mashing is what makes it perfect. This sideline is a must and goes well with your bratwurst sausages.

This salad is exactly what you need as a sideline with your bratwurst sausages. Macaroni is something which you can never say no to. This sideline is for pasta lovers.

Spicy macaroni made with seasonal herbs and spices in heavy cream and cheese.

This sideline is heavy on the stomach and can quickly fulfill your appetite when consumed with your brats. It is incredibly flavorsome and tasty. If you want to present some fancy food to someone, then bratwurst sausages along with this creamy macaroni salad are the right option for you.

What to make and serve with brats for dinner?

Brats can be eaten at any time of the day. Be it breakfast time, lunchtime, or dinner time. Bratwursts are always there to fulfill your appetite and provide you with many nutrients.

What if you want to make brats for dinner? Which sidelines would then be the most thoughtful to make? This article has got all your answers! These are the top 5 sidelines you can make when eating brats for dinner.

One of the best things that go hand in hand with grilled brats is grilled veggies. Zucchini with squash is one of the best sidelines you can have with your brats at dinner. People like vegetables more when grilled because grilling adds a subtle flavor to the veggies.

This sideline is for the onion lovers who like to eat onions after frying them until they turn golden brown and crispy. Putting this sideline on top of your bratwurst sausages makes them more flavorful and tasty to eat. This sideline is also easy-to-make and has a very subtle taste.

Thinking of making bratwurst sausages for dinner and don’t know what to make for a sideline? Roasted artichokes are here for the rescue. They are delicious when dipped into a creamy lemon aioli. This sideline has an earthy and comforting flavor that pays off to the struggles of roasting it.

This is for all protein lovers. You can have your brats for dinner along with baked beans finely mixed into a barbeque mixture to make them flavorful and spicy. Just add the barbeque mixture into the baked beans according to your spice tolerance level, and you’re good to go.

All good things come out from potatoes. If you’re tired and just want to make an easy sideline to have your brats with, then look no further because spices sweet potato fries are here to help.

The potatoes are finely sliced, and spicy homemade seasoning is added to them, which gives it a sweet yet spicy touch. They are one of the best sidelines you can enjoy along with your bratwursts.

What vegetables goes good with brats?

For the people who love to eat veggies, then cabbage, cucumbers, corns, potatoes, and spinach are some of the many vegetables that perfectly go well with your brats.

Brats are an easy-to-make recipe that requires little effort, and you can eat them in every season with different sauces and bread of your choice. They are heavenly and will make you crave for more. So hit the stores, get the ingredients, and make your homemade brats soon. Don’t forget to make the sidelines too!

So, do you already know what to serve with brats? Please, feel free to share your opinion in the comments below! 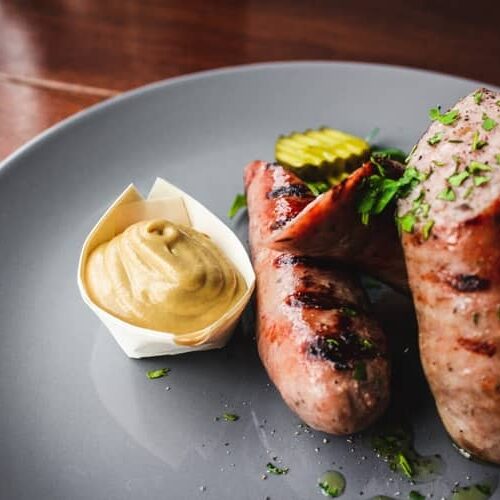 What To Serve With Brats? 17 Sides That Goes Good! 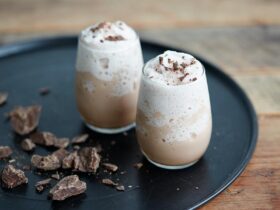 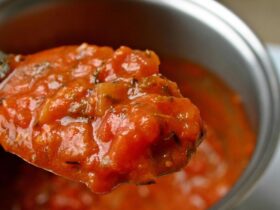 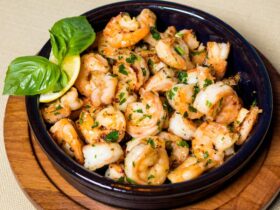 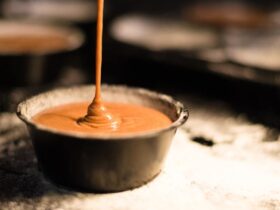 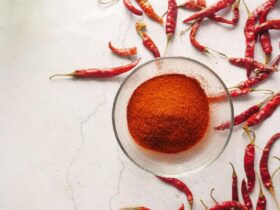 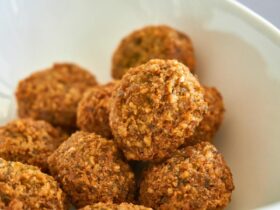 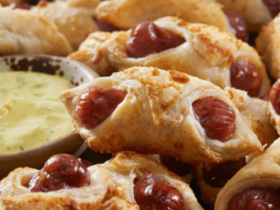 How Long to Cook Pigs in a Blanket at 375ºF? Instructions